Let’s start off by saying that boobs are a sensitive subject.  Whether you are a very young or a mature reader, you must know your boobs well being are important. I don’t think I can stress that enough.  I’m not saying that your boobs are your identity but rather an aspect of one’s body worth befriending early on in life.  With time, for some sooner than others, gravity becomes an inevitable enemy regardless of one’s cup size.  With that being said, preventative measures are never too early.  As a human who has yet to embark on the journey of motherhood you may ask why I would even consider such a preventative product.  Well let me share, as a person whose weight has fluctuated, ( and I do use the term fluctuate very loosely), I have noticed that I do not wish to reach the end of the tunnel with saggy droopy boobs that can tucked into my skirt.  If anything this is one party trainl I’ d like to leave early from.

One night, as I was scrolling down several open tabs on my laptop, I came across the company by the name of Mama Mio. which is targeted for pregnant females.

Like I said earlier, the body goes through changes, pregnancy being one of them.  I in turn associated weight loss as a reverse pregnancy and figured if this product works for pregnant women, it should work for me.  (As you may tell this theory appears a tad warped but I felt at the time it had a strong premise).

Fast forward two weeks later when my package arrived in the mail. 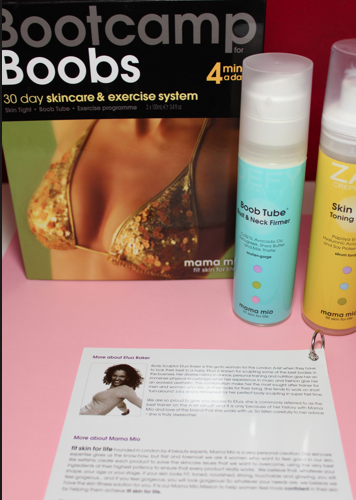 The kit includes 1 bottle of “Bube Tube” a bottle of “Skin Tight” and a set of flash cards with instructions on how to start the boot camp regime. 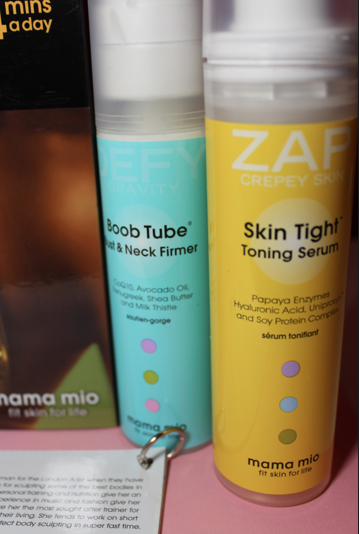 Now that the kit has arrived, I will set forth on this journey to test out wether or not I’ve seen any changes or improvements while using Mama Mio Bootcamp Boobs.